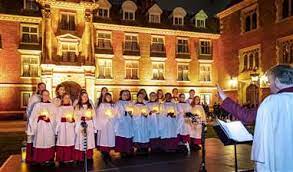 Saturday 30th of April 2022 at 1800 The Girls Choir of St Catharine’s College, Cambridge. Tickets £10 on the door. Works by Purcell, Fauré and Pergolesi, also songs by Richard Rodney Bennett. Organ pieces played by the College Organ Scholar. Concluding with songs on scientific themes, from the choir’s project ‘Stem in Song’

‘an exceptional girls’ choir’  The Observer

Founded in 2008, the St Catharine’s College Girls’ Choir was the first college-based choir for girls in the UK, breaking with 900 years of tradition and setting a precedent which has been followed by several other institutions both here and abroad. The choir provides a unique and invaluable musical experience for girls aged 8 to 15; with many girls continuing to age 18 in the mixed-voice College Choir.

The choir sings weekly in the College’s 18th century Chapel, as well as giving regular concerts, and its repertoire extends from the early Middle Ages to the 21st century, including music both sacred and secular.

The choir is currently made up of 20 choristers and 8 probationers, aged between eight and fifteen, and are drawn from local schools. The choir is semi-independent of the mixed-voice student College Choir,

The choir has given performances in such distinguished venues as St Paul’s Cathedral, St David’s Hall, Cardiff and St John’s, Smith Square, and has sung services in several UK Cathedrals.  The girls have toured to the USA and throughout Europe. and are regularly asked to participate in major choral/orchestral works such as Bach’s St Matthew Passion, Mahler’s Third Symphony, Elgar’s The Dream of Gerontius and Holst’s The Planets. The choir has made several appearances on BBC Radio, including a special edition of Radio 3’s The Choir with opera star Sarah Connolly as part of the celebrations marking International Womens’ Day; and a former head chorister of the choir was awarded BBC Young Chorister of the Year. The choir have made a number of commercial recordings, released under the Resonus Classics label, and has been involved in special outreach and educational projects, most notably STEM in Song, which brings together music and science. The most recent collaboration, celebrating the anniversary of the Periodic Table, resulted in a performance and sound installation at the London Science Museum.